A lovely member on PES Social

# Mostly unchanged stadium packaging - stadium structure remains almost identical to the .cpk version, meaning that entire stadium directory tree (starting with "Asset" and "common" folders) can be copy-pasted into one top-level GDB folder. These folders (and their subfolders) from the usual stadium-related cpk-tree are currently supported:

# Stadium assignment to competitions via map_competitions.txt file - use it to connect competition/tournament ID with one or more stadiums from GDB.

## It is possible to assign unlimited number of stadiums to the same competition - in this case, ONE RANDOM stadium will be selected for every home team that:

IMPORTANT: by default, competition assignment would always take priority over team assignment in any game mode, but that can be easily configured within .lua script.

Default stadium server script already includes an exhaustive override_competitions table, which should cover all available exhibition, league and league-cup matches - so that you can keep individual stadiums for those teams that already have one in map_teams.txt, while all the other teams without individual stadium would get randomly selected stadium from map_competitions.txt

## Support for optional stadium to be used in final match of the competition only - again, pretty much self-explanatory. See map_competitions.txt file for more details

CAUTION: if multiple stadiums are assigned to a single competition and you want to use specific stadium for finals, then you must include stadium for final match IN EVERY stadium assignment

# Manual stadium selection via in-game overlay - manually selected stadium has highest priority and overrides any assignments made via map_*.txt files. IMPORTANT: Only stadiums explicitly assigned in either map_teams.txt or map_competitions.txt are available for manual selection!

Complementing this, an additional lua table is available to be customized inside the script (teams_with_cpk_homegrounds table), to customize which teams should keep their .cpk+EDIT assigned home grounds (e.g. Barcelona -> Konami's Camp Nou, Team X -> Stadium X from your .cpk, etc.).

# Correct stadium previews and stadium names - displayed in game menus (where available, depending on game mode) and scoreboards

1. No support for replay mode yet - if you're going to watch a saved replay of a match that has been played on custom stadium, you'll see black screen with adboards only during replay at best (perhaps it may also crash the game) - current version of sider does not support replay gallery!

2. adboards handling - by default, stadium server does not allow for custom adboards embedded within stadiums.

It works safely only with special blank adboards template (which should be used only to fully remove adboards from stadiums) and allows for supplying a custom version of config.xml database for adboards (to assign blank template to the stadium).

Custom adboard models, "baked" directly into stadium 3d model are neither safe nor meant to be used via stadium server - adboards available via global ad-boards system (.cpk files or sider's live.cpk root) should work well with stadiums from stadium server too!

3. IMPORTANT: cooperation with other .lua scripts that use "set_stadium" and "set_conditions" events - unfortunately, because of the way the stadiums are structured and handled by the game, it was necessary for StadiumServer.lua to use set_stadium event exclusively to force the game to use the exact stadium ID of the new stadium, in order to load all the files that belong to that stadium.

Another approach, which would not "steal" set_stadium event (i.e. trying to override the files of any stadium that the game would like to use) did not prove successful, because stadiums simply are not file-for-file compatible, causing various artifacts when trying to replace e.g. stadium using ID 016 with custom stadium using any other ID

Recommended way to re-pack stadiums that are available in .cpk files

With add-on system in Stadium Server, 3rd party modders can create their own mini-mods (a.k.a. AddOns) for stadiums in stadium server.

Add-ons can only be used for stadiums in Stadium Server.

addon_config.ini file content for the above general Add-on structure:

1. Both mod_1 and mod_2 will be used, mod_1 files might have higher priority that mod_2 files

2. Both mod_1 and mod_2 will be used, mod_2 files might have higher priority that mod_1 files

Every add-on DOES NOT have to include ALL the above mentioned folders.

1. If your add-on does not need weather-specific logic and if there is only one stadium in Stadium Server's GDB folder ("Stadium_top_folder"), you can include only "Global" folder - ideal for simple turf mods. Files in "Global" folder will be used for all weather modes.

2. If you don't need weather-specific logic, but "Stadium_top_folder" includes multiple stadiums (e.g. stadium packs), then you may include:

Priority levels within the add-on

Files from this global folder will be applied to the entire stadium server collection, unless overridden by more specific files from Stadium-specific add-ons.

E.g. it can be used to apply one common version of turf files to all stadiums in your stadium server collection, so that you can cover those stadiums that do not have turf files made specifically for them.

Examples (again, all of them taken from 2019 thread - logic is completely unchanged, only some folder names may be new for 2020 🙂 ) 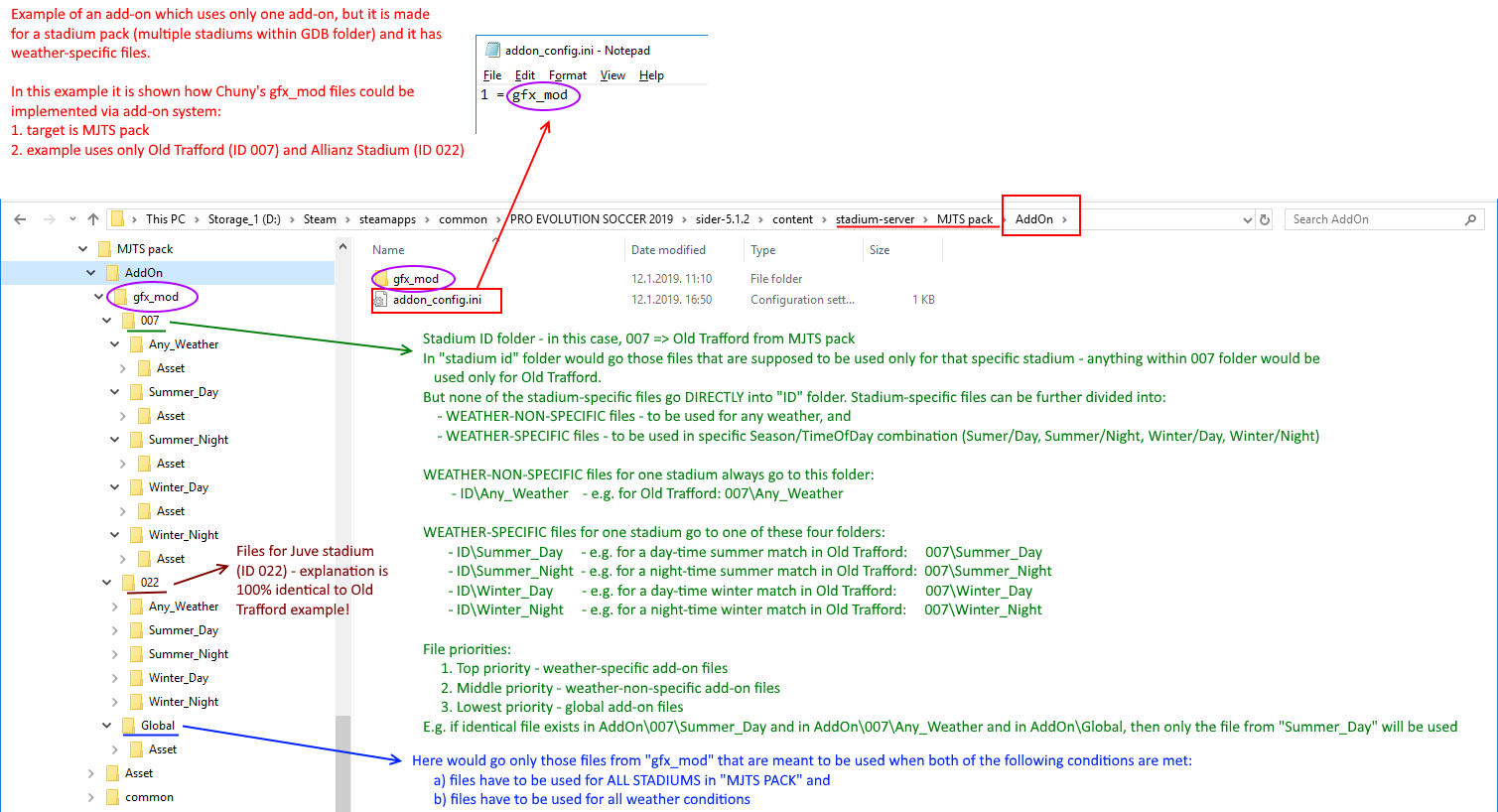 2. Multiple add-ons for one stadium; add-ons DO NOT need weather-specific logic

Corrections for kit attributes: ChestNumberY, NameY (bigger range of values for both) – bug-fix: non-ASCII filenames are...

Support for 1.02.00 game exe - fixed a bug in memory.search function

This sider module, written in Lua, is a new take on that original idea of Kitserver. It allows a lot of freedom in manag...

If you want to prevent PES from connecting to the internet, but are uncomfortable with tweaking of the hosts file, then...

The Settings.exe file to determine whether your PC or laptop is entitled to play Pro Evolution Socce...